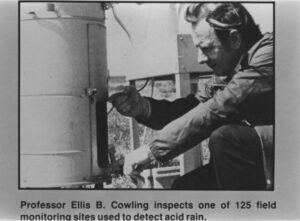 Ellis B. Cowling received a B.S. in Wood Technology from State University College of Forestry at Syracuse University in 1954, a M.S. in Forest Pathology from Syracuse in 1956, and a Ph.D. in Plant Pathology and Biochemistry from the University of Wisconsin in 1959. He received a Filosofie Doktor (Ph.D.) in Physiological Botany from the University of Uppsala in 1970. It was his time in Sweden that introduced him to the scientists and science of acid deposition; he brought these issues back to the U.S. when he returned to his position at North Carolina State University. Beginning in 1975, he led development of the proposal for project NC-141 to the U.S. State Agricultural Experiment Stations, later adopted as the National Research Support Project – 3, which established a permanent national precipitation chemistry monitoring network – the National Atmospheric Deposition Program / National Trends Network.

Elected to the National Academy of Sciences and recipient of many awards, Cowling was an eminent scholar and teacher of forest pathology. Over his life he used his notable energy, intellect, and humility to bring together scientific and other communities to address pressing environmental and societal issues ranging from tropospheric ozone and sustainable animal waste management, to moving an iconic lighthouse in the face of sea level rise and university systems of promotion and tenure.

Ellis Cowling was Chair of the NADP Executive Committee from 1978 to 1983 and worked to sustain support for monitoring sites in North Carolina and the national network even after his retirement from NC State as University Distinguished Professor At-Large in 2008. His passion for the longevity of NADP is embodied in the title of his keynote address at the 2008 NADP Annual Meeting, “Thirty Years Down and a Century to Go.”

At the 2021 Fall Meeting and Scientific Symposium, Cari Furiness gave a tribute to Ellis Cowling, the video from the opening session is available below.

History of Acid Precipitation Research in the US: Part 1 – with Ellis Cowling

History of Acid Precipitation Research in the US: Part 2 – with Ellis Cowling